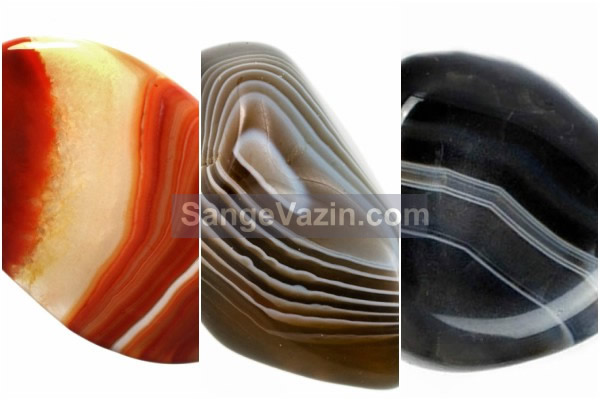 Gemstones have long been known for their healing properties, and people have used them to solve their problems. Stone therapy is a part of ancient medicine that the sages believed in its rich and miraculous benefits. Stone therapy, which is considered one of the academic sciences today and has been studied extensively, has proven the belief that stones can affect our destiny, states, diseases, and behaviors. The effect of stones on different people is different and, each stone has different benefits and properties from other types of stones, so it is not easy to see the miraculous effect of precious stones, but it is necessary to use them with knowledge of the properties of each stone and its coordination with the person to be effective.

A type of precious stone that has many healing properties is called agate. Red or liver agate, black agate, brown agate, or tree agate are each used to solve problems. Agate has long been used for decoration and healing and has been known to invigorate the individual. Red agate is the most popular type of agate gemstone, which is considered due to its properties such as strengthening individual creativity and initiative, success in communication and association with others, and creating courage in the individual. In the following, we will discuss the properties of different types of agate so that you can choose the appropriate one according to your moods and use it. Ancient astronomers believed that agate belonged to the Twin Towers and its main property was to strengthen the will.

The more research is done on stone therapy, the more we realize the undeniable properties of this science. Gemstones have many properties and affect the life of the person who uses them. Red agate or liver, which is dark red, and bubbles can be seen in the light, is also one of the most valuable gemstones in terms of healing properties.

Self-awareness of personal feelings, increased self-confidence, ability to communicate with others, and increased social communication are some of the properties of red agate gemstone. In addition to its unique beauty, this stone also affects people’s minds and leads to an increase in the power of creative thinking. Creating creativity and initiative and raising a person’s curiosity are other properties of red agate. This agate also affects appetite and motivation and can be used to control oneself because one of the benefits of agate is awareness of individual feelings. Looking at agate brings joy and happiness, and it is a joyful stone and is effective in treating depression and illness.

People who do not have a strong memory can also use this stone and understand its extraordinary effect; Because red agate is effective in increasing memory power. Agate stone brings happiness to its owner by eliminating the negative energies around it. Spiritual teachers recommend the use of agate to keep dark forces away from the person. Agate spiritually affects a person’s sense of security and removes negative energies from the person.

In traditional medicine, this stone is used to treat eye and stomach diseases. Some believe that agate also plays a role in fertility. Red agate gemstone also has a positive role in regulating the endocrine glands, treating bone and muscle pain, and improving heart function.

Spiritual teachers believe that black agate affects reducing psychological and nervous stress. This stone can keep you away from unfortunate events and increase your endurance and patience. Increasing self-confidence and creating a feeling of fearlessness are other benefits of black agate.

One of the benefits of black agate is to balance the body and mind, and therefore athletes use this stone to create psychological balance during physical stress. Black agate stone is powerful and has a great effect on the sense of power in a person and increases courage and boldness.

Stone therapists believe that it is necessary to put black agate on the skin for a long time to increase its effectiveness over time and realize its unique power. This stone plays a role in clearing the halo and removes negative energies from the person, and like the red agate type, it can bring joy and happiness to a person’s life. The treatment of individual disorders and the creation of a sense of power and decision-making ability are other characteristics of black agate.

Traditional medicine specialists also use this stone to treat some diseases, including skin diseases and various wounds and infections, and reduce inflammation and swelling, including the healing properties of black agate. Strengthen teeth and bones, treat sunburn, reduce bleeding, balance sexual desire, and treat intestinal, prostate, and liver diseases.

The dendritic agate stone has a different composition in each of its pieces, and its veins and natural color show a difference from other stones. This stone has been used since ancient times to reduce anger and suppress individual emotions. There are even stories in legends about reducing thirst and thirst with the use of this stone. The tree agate, which is so named because of its colorful composition and sometimes resembles a tree, is effective in strengthening the power of understanding, analysis, and reasoning. Balancing and reducing emotional outbursts is the main feature of this stone. Agate suppresses sudden anger, balances the body and soul, and affects emotional states, balances the body and mind, eliminates pessimism, strengthens memory, and affects concentration.

Dendritic agate is spiritually involved in creating positive emotions such as goodwill, a sense of security and power, honesty, calmness, focus, and courage. Spiritual people consider this stone to have a power that brings good luck and protects children in bad events such as natural disasters.

Dendritic stone is also physically strong and effective. This stone can reduce sleep disorders, increase physical strength and help treat some diseases. Improving blood circulation and eliminating pancreatic diseases are among the physical properties of shale agate on the body.

Brown agate, like other types, is used to strengthen the volition and has many healing properties. This stone is powerful and, experts believe that it causes happiness in the face of natural disasters and, protects man against the anger of nature. Psychologically, the feeling of security that having this stone gives a person and the sense of confidence in resolving disasters is effective in creating peace. Many people use brown agate to grow their business. This stone also plays a positive role in life by increasing one’s willpower and thus making things easier. Spiritual teachers believe that negative energies are scattered around this stone and brown agate is useful and suitable for clearing the halo. Creating balance and vitality and establishing peace and tranquility with yourself are other properties of brown agate. All types of agate stones bring joy and freshness to a person, and watching this stone and looking at it also causes happiness in a person and removes sorrow from him. Agate is considered a pleasant coffee and is a lucky stone.

Physically, brown agate has numerous benefits. In traditional medicine and various types of ancient medicine in different countries, this stone was used to treat diseases. Brown agate is effective in treating eye diseases, head and neck and back pain, gastrointestinal diseases, and ulcer of the stomach and intestines, as well as the proper functioning of respiratory organs such as the lungs. This stone is also used to balance prostate function and reduce muscle cramps.

The Originality Of Agate

The effectiveness of precious stones reaches its peak when it is the original stone and is considered a precious stone. A scientific study has shown that artificial crystals have no effect on meditation and in this regard, the originality of the stone and its long-term use increase the effect of the healing properties of the stone.
It is difficult to distinguish the original stone from the fake one. There are some simple ways to know the original agate. Agate stone does not burn in fire, of course, using this method is not practical when buying stone. With agate, you can engrave a line on glass, but the polishing of the stones before selling this method is also not applicable. Agate is not scratched by sharp objects and can be seen in the light of hive-like bubbles. You can try the last two methods when buying and make sure that the stone is genuine. Hold the stone against the light and see the bubbles inside it and also draw on it with an object. These two methods are practical. See the article for more information on this refer to the authenticity of agate.

Method Of Identifying The Original Agate