Agate gemstone (AGATE – Latin ) is a precious quartz stone consisting of silicon. In addition to its unique beauty, agate has many properties in the human body and soul, which we will discuss in different aspects in the following article.

You will read in this article:

Agate is a type of quartz that, according to the Mohs Hardness Table, hardness is about 7. Among minerals, diamond, with a hardness of 10, has the highest degree of hardness and is considered the hardest mineral, and graphite (pencil core) has a hardness equal to one. It can be said that the original agate has a good hardness with a difference of 3 degrees compared to diamonds. This hardness level is one way of pricing agate and distinguishing the original from its fake.

Metaphysically, agate vibrates slower than other stones but is considered a stabilizer and amplifier. In agate, microscopic quartz slides may look delicate, but it has a very high purity percentage and is present in rock texture with a significant percentage. Agate is usually found in beautiful colors, and its delicate parallel bands are usually “curved” and, in some specimens, concentric. Most agate used in trade are artificially painted and lack the energy of nature.

According to their properties, jewels and stones absorb cosmic rays and heat and then reflect light and radiation to the halo and chakras.

Historically, Agate has been discovered with ancient Neolithic artifacts and used as healing anthologies and decorations dating back to Babylon. Its therapeutic uses have spread from ancient Greece and Egypt to Africa, the Middle East, and Russia.

Healing Properties Of Agate On The Soul And Psyche

Use Of Agate In Feng Shui (Energetic Decoration):

Since Agate has balancing energy with healing properties and can be very soothing, it is widely used in Feng Shui. Agate gives an exceptional freshness to its environment with its healing power and is also considered an earth protector. Therefore, they often use different opal designs in feng shui decorative accessories.
According to recent observations, the type of Iran agate has been identified as very suitable for ornamental purposes, ornaments, stone therapy, stone artifacts, decoration, and interior design.
Imagine how much energy lies in it since Agate dates back to about 55 to 60 million years ago. Therefore, having a piece of this eye-catching and wonderful gemstone in the polluted artificial environment of modern life will be a gift of nature’s unique masterpiece. The use of an agate clock represents eternal time in this design and a joint product of nature and the human mind.

New And Special Uses Of Agate

Agate stones are used for ultra-luxury buildings and hotels, stone and energy therapy pools and baths, ultra-exquisite statues and sculptures, countertops, luxury cabinet tops, partitions, and thousands of other uses.

Sedimentation of agate stones belongs to the Cretaceous period from the second geological (Mesozoic) era. Iran agate rocks in this period are due to the phenomenon of folding with the rise of volcanic material vapors from under igneous and cold stones and the crystallization of these vapors on limestone. But the 60-million-year-old top layer is older than the 25-million-year-old subsoil (the phenomenon of folding during orogeny has caused the layers to reverse).

Elements such as copper, iron, and chromium have caused red and yellow colors and effects in the beautiful and unique stones of Iran agate. Most of the rainbow spectrum is present in these stones and is dominated by warm shades of red, orange, and yellow, known to jewelry experts as miniature autumn agate.

2 / Unique Dimensions And Volume Of Agate

Agate is often found in the shape of a few centimeters and small sizes of thin bands in white and gray colors, which are dyed with acidic pigments and enter the market. This stone’s primary producers and exporters are Brazil, India, and China. Colored agate is very rare and expensive globally, and due to the lack of large reserves and large dimensions, not much work has been done in this field.

Meanwhile, Iran agate is the largest agate mine in the world in terms of the diversity of colors and veins. And in large and unbelievable dimensions, the average is over 5 tons.

Color stability in Iran agate is somewhat high at 1000 degrees Celsius and maintains its color stability. But limited and similar agate stones in India lose their color inside and outside the Red soil and in front of the sun.

Iran agate is the only agate reserve globally that has significant and abundant dimensions to become ultra-luxury agate bathtubs that have sold from $1.7 to 6 million in the world.

One of the capabilities of this stone is that it is unrivaled in terms of beauty and quality. ‌And it can compete with Yemeni agate.

Of course, we should mention that the Yemeni agate stock has run out, and it has a limited color variety.

Moreover, there is no large, one-piece tile in Yemen and nowhere in the world. The agate tiles in the world are sorted and painted tiles sold in Italy and China at prices above 2 to 5 thousand dollars per square meter, which is nothing more than a piece of Iran sleeping agate tile.

Finally, Iran agate products are still unrivaled in being a one-piece, large volume, beauty, and variety of colors and streaks in the world and the market.

Method Of Identifying The Original Agate 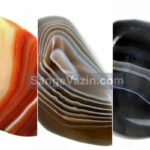